Ok so this is my first foray into writing a race review but I thought it’d be a great opportunity to start AND highlight an event that I found to be (spoiler alert) a great time. 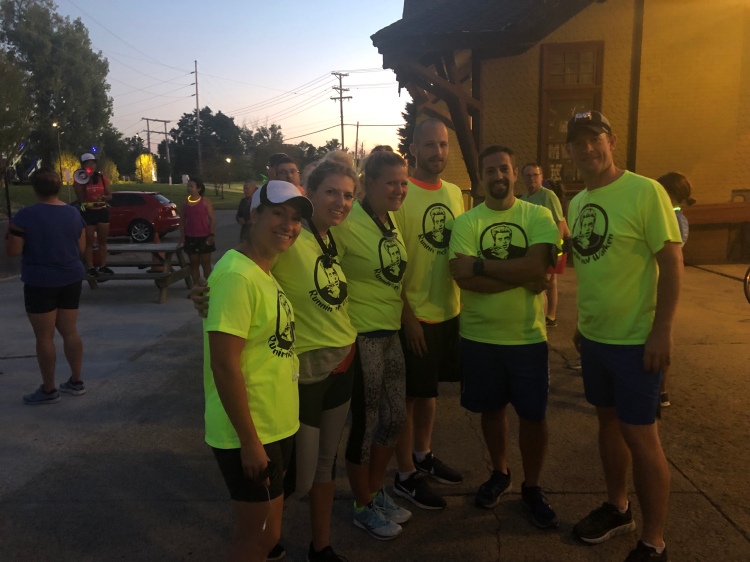 From the beginning, since NeighborLink Fort Wayne has been our charity of choice, we wanted to make sure to be involved in and support some of the events that they put on throughout the year.  Night Moves is a natural fit for what we do as part of running a Ragnar involves running a night so we’ve got the necessary gear to run at night and in fact, I really liked the idea of getting some of the team together that maybe hadn’t participated in a night run before, out there and somewhat comfortable.

It has always been a goal to get the team, as many as possible at least, together prior to our annual Ragnar Relay for a fun run to just catch up, talk about what’s to come, and answer any questions that some of the newer runners may have so participating in an event like this achieved something that we’ve tried to do for a couple years and it definitely paid off.

Lastly, it was also a great opportunity take in Fort Wayne.  If you’ve never been to our city, Fort Wayne has gone through a transformation over the last dozen years or so.  It started with a new ballpark downtown for our Single A baseball team and the area has absolutely blossomed.  From improvements in amenities to new restaurants and pubs, new hotels, and now the just finished Promenade Park that’s part of Phase 1 of our riverfront development, a lot has been going on in the downtown sector of Fort Wayne and this race gave us the opportunity to enjoy the city in a way that we’ve not done before.  Again, it delivered in a big way.

The concept behind their Night Moves racing series is a simple one.  They’ve removed the barriers of cost and just asked for or encouraged a $10 donation per runner.  You’re not going to find any race in the area that you can participate in that’s this affordable, nor maybe this fun either.   NeighborLink really did a fantastic job of having a volunteer at 95% of the corners or intersections that you came to and required guidance. 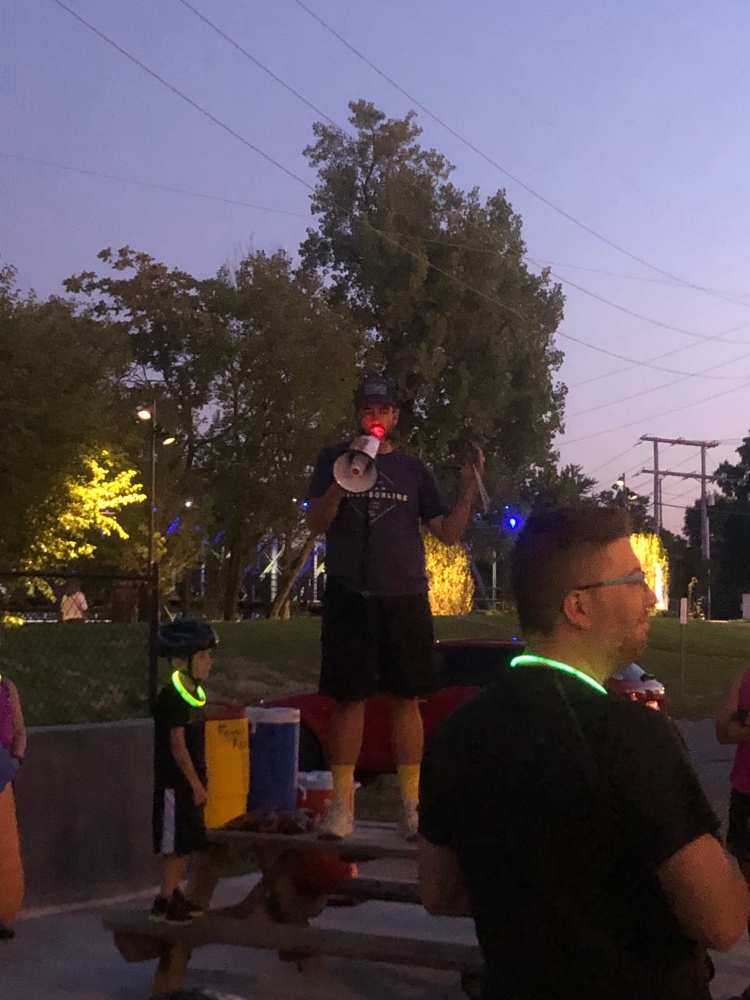 We started off at Fort Wayne Outfitters, who essentially hosted the race as it was the start and finish for the race.  We took off from their location and headed down a quick path to our left and onto the Tree Canopy Trail that’s part of the riverfront development.  It was a really need path with the only downside to it that it was a Friday night in downtown, part of a new park, and a festival had been going on in downtown so there were a good number of folks checking out the new Promenade Park and this trail.  As we curved around the trail, dodging local pedestrians, we came to the end of it and turned left onto the pedestrian bridge that was lit up that night and carried us over the river and to the other side of the park. 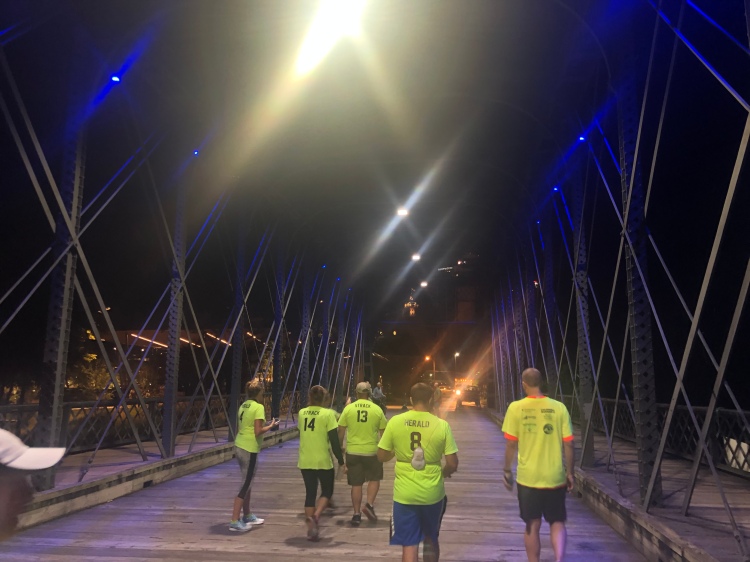 This was a really need way to get a quick glimpse of Promenade Park as we ran through it.  It was a beautiful night and the steps down to the river were lit up and reflected off of it.  As we exited the Promenade Park we turned right onto Harrison Street and cut left down an alley past a mural of a buffalo, at least from my memory, I believe it was a buffalo.  The idea of the race was to take us past as many of them as we could.  It was a neat concept.  The only thing I’d say is that starting earlier in the evening would allow us to see them better.  That said, once we turned onto Calhoun Street, we got to see downtown lit up in all of its splendor.  From the some of the shops to restaurants with outdoor seating, it was really need to be in the middle of it all with so many people around.  It was a great vibe down there that evening.

We proceeded down Calhoun and cut into another alley that was painted on both sides in a colorful manor and it had Edison style lights overhead.  It was really cool.  We raced through that alley and crossed paths with some of our runners ahead of us that were directed them and eventually us to circle around the building.  It created a fun little intersection of runners and when we came back through the area from the other direction, I was sure to be paying attention in case anyone else was coming through.

By this point, I was running far too fast for me.  I had broken a part from my pack a bit.  I had started the race with my wife Jennifer who told me that if I was feeling good to go ahead.  I caught up to Kelly and Amanda a short while later and honestly, my legs were feeling fantastic.  Earlier in the week it had been nearly 80 degree with equally as high humidity.  It was around 65 degrees and while the humidity was similar, due to the cooler weather, it didn’t feel anywhere near as oppressive as it had just a couple days prior.

After doubling back through those allies, we headed back up Calhoun and took a right onto Main Street and through part of the Taste of the Arts Festival which was winding down.  Shortly thereafter, we turned left onto Lafayette heading north and crossed the St. Mary’s River and headed towards the Old Fort.  By this point, myself along with a girl, that may have been in her mid-teens, pulled away from our portion of the pack.  Due to the nature of the race, you had to stop at crosswalks depending on traffic and we were running at a pace that was pretty good and we got some separation from the group we’d reached and then eventually passed about 10 minutes before.

Around that time, I turned my headlamp on as it was getting into some areas that weren’t lit as well as the previous segments of the race.  I was glad I had it on me as well.  The young girl only seemed to have her cell phone for light.  That’s nothing I’d ever recommend and the dad in me was coming out as I felt like I had to try to keep up that pace so she wasn’t running with just the faintness of that phone.

When we turned onto the River Greenway path that cut through the Old Fort, it was pitch black!  I had gotten ahead of her a little ways but my 38 year old lungs weren’t enjoying running at that pace and I started to slow a bit.  My first mile was around a 9:15 and my second chimed in my ear at an 8:51 while I was plugging away in the darkness there.

Eventually she passed me and I did my best dad mode try to keep my headlamp on her so she could see where she was running.  I kept pace with her as we turned onto 4th Street and till about the time we got near the skate park at Lawton Park.  The lights of the skatepark were pretty bright and I turned the headlamp off at that point.

It wasn’t long before we made another turn left onto Clinton and onto the path onto and over the colorfully lit Martin Luther King Jr bridge and into the eastern side of Headwaters Park, making a hard left turn once in the park which doubled me back under the bridge and then looping back up onto it heading in the opposite direction from where I originally came across, all the while the bridge lights changed colors from a rainbow pattern to blue and then white.  It really is something to see a night.

So I headed back west down 4th street again until I passed the fox murals by the Big Eyed Fish and hung a left onto Wells Street.  The 4th street section was the only area of the race that could have used a few more volunteers for comfort as the sidewalks weren’t the greatest and it was fairly dark there around the neighborhood.   Once on Wells, I ran all the way back to Fort Wayne Outfitters and ran into Matt and Chris, two members of Runnin’ Not Walken that were a good bit quicker than I am and had already finished.

Upon crossing the finish line I was told to meet up with a nice lady who was checking off names of those that finished, not for times, but for safety so that they could ensure that everyone that went out, made it back.  This was afterall, a fun run, and we weren’t out for time but to run for the joy of running and to support this wonderful organization.  After checking my name off of the list, Matt and Chris pointed out a cooler to the side that was for runners to partake of, if they were interested, and I did.  It was a great Mad Anthony’s wheat beer that had my name on it and it tasted fantastic.

Within a couple of minutes, Art and Amanda, 2 more members of the team who couldn’t run that night arrived just as the last of our team was finishing up.  We all were happy to see each other and all seemed to enjoy the race and the route. 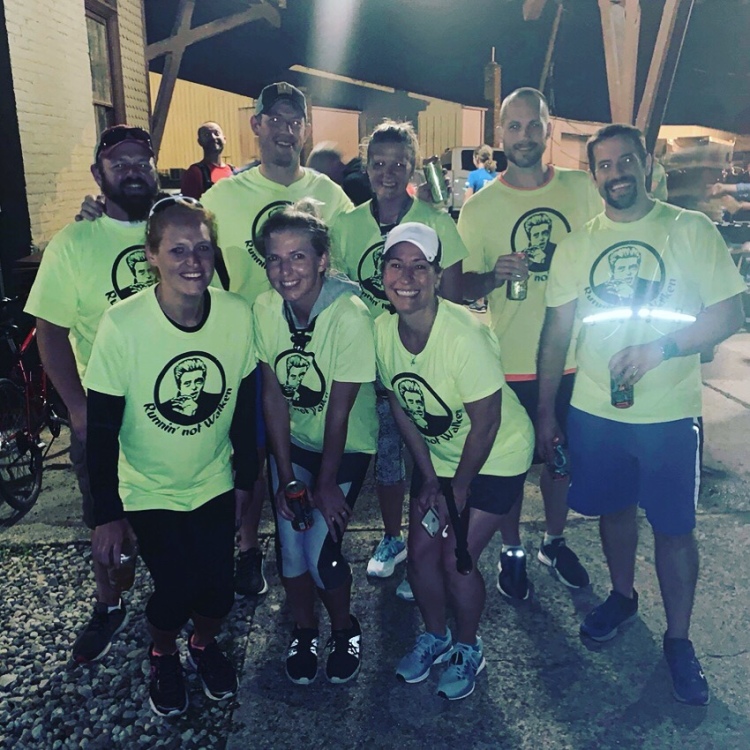 Kudos and hats off to Andrew Hoffman and his team for putting on a great time.  Every volunteer out there had a smile on their face and was more than encouraging as they greeting us during the race.  They really did a fantastic job of supporting the runners and directing them where to go.  Other than a couple spots that were a bit on the darker side, there wasn’t anything to really worry about despite running through the city at 9:30 at night!

Hopefully we’ll be able to do it again soon as they have a race in a couple of weeks but for a first go of it, we had a great time.  If you’re in the Fort Wayne area, love running, and appreciate those that are doing good and want to support them, this is the race for you. 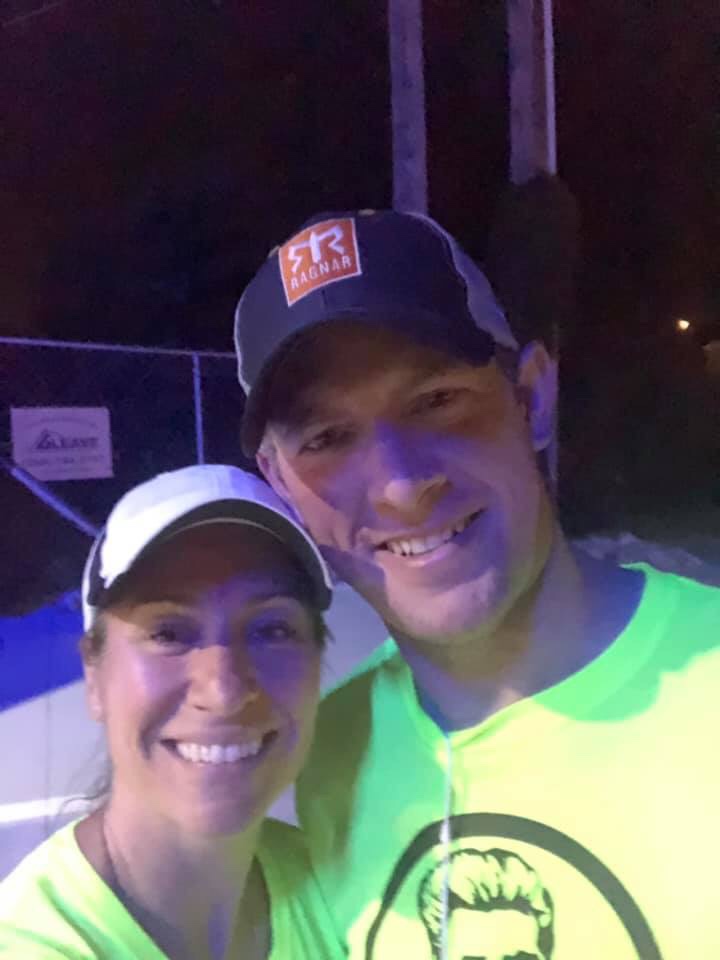 Oh and I’d be making a big mistake if I didn’t offer it out there but if you’d like to support NeighborLink, they are Runnin’ Not Walken’s Charity of Choice this year.  To date, we’ve raised $4,620 on a $5,000 goal so we’re getting close.  If you’d have an interest in contributing, please click the following link to give.

Thanks for reading and as opportunity allows, I’ll definitely do more of this.  Oh and here’s a picture of Promenade Park during the day.  Isn’t it beautiful?!?