The above quote seems incredibly appropriate considering this is my first blog post ever so in that way, yes the journey is indeed beginning, however, my team and I, our journey began 4 years ago.  If you read the “About”, you learned a bit about the page, a tiny bit about myself…my name is Gabe by the way, but mostly what this is all about.  Hopefully you’ll ride along with me in this little literary adventure of my first blog.

The below pictures are from our maiden voyage as Team Runnin’ Not Walken.  You can find the team on Facebook, Twitter, and Instagram if you’d like at @runninnotwalken.  We’re now 3 teams in and probably have had more than 2 dozen different people run with us but in a lot of ways, this first team was pretty special.

It all started in the fall of 2014.  I had observed a post from a local runner who had participated in Ragnar Relay Tennessee, @ragnarrelay, and I thought to myself…that looks absolutely amazing.  It really seemed pretty cool but I’ll be the first to admit it now as much as then that I was in no way prepared for it.  Three Ragnar’s later and sometimes I feel like the process is refined but I’m still in many ways….not prepared for it.

A bit more about myself: I’m writing about runners doing good and all of the great things that they have done or are doing and I feel like I’m far more accomplished on the team ops side than I am an actual runner but here’s the thing, I’m terribly drawn in by the running community.  I think it’s pretty amazing.  I don’t pretend to be great at it and I think that’s why I’ve been so ready to lift others up because my own goals and efforts at it have been more about preparation and part of the process than anything about myself individually.  That may change but from it didn’t take long for this to be more about the team than anything else.

A little more, I sprinted and long jumped in high school after 4 days of excruciatingly painful long distance training.  I realize it wasn’t much but I knew it wasn’t for me.  So it’s pretty ironic that I’m filling this space that’s devoted to long distance accomplishment and I’m nearly 20 years past when I considered myself really athletic.  I in fact, hated long distance running of any sort at the time and even more ironic is the fact that when I signed up for that first Ragnar, the longest run I’d ever had in my life that I’d signed up for and actually ran was 4 miles and so signing up for a Ragnar Relay where you’d run 3 times in 30 some hours and could be over 15 miles in that time was a gigantic leap of sorts.

So why a Ragnar?  Again, it looked like a massive challenge.  I was somewhat out of shape.  My wife and I had been married a few years, happily I might add, and it’s not an exaggeration to say that every time she had a baby, once I took those 2-3 weeks off to help at home, I ate my way through those 3 weeks.  It wasn’t stress eating really it was just that people brought food over constantly and I couldn’t step away from it.  Something needed to happen and when I saw what this Ragnar Relay thing was about, the next thing that crossed my mind was how can I do this and it came down to simply seeing who else would be willing to do this crazy thing.

From there, I reached out to a couple cousins and surprisingly, they sounded like they were in.  It wasn’t long until we all agreed to talk somewhere around our family Christmas party which was usually the middle of December.  We only talked briefly but the consensus was that if we were going to do this, let’s do it before pricing increases even more.  One cousin, Sarah, seem convinced that she could could round up some friends from Madison, WI where she and her husband, Andy, were living.  I was down with that so I told her to do what she could.  I had at least 3-4 which put me close to figuring out one van.

So we registered with probably 6-7 runners and then everything just amazingly enough fell together.  Sarah ran down 5 runners which was 4 to run and 1 to replace her when she had some knee problems.  I had 5 others than joined me in my van.  It really was an awesome team.  NO ONE and I mean NO ONE knew what to expect except for Courtney, a cousin, who had does something similar before but that was it! The beautiful thing was that we one half of the team didn’t know each other at all and vice-versa but everyone consistently asked how they could help.

Along the way, one cousin, Joel, and I were talking and the thought came to that a 200 mile relay really was pretty significant and that we could do a little good with it.  So we set out with the idea that we’d run a fundraiser as well.  I’d never done such a thing but I was willing to make it work we agreed on a $1,000 goal and the group’s feeling was that if it didn’t pan out, there were enough of us to pitch it to hit it but who would we try to help?

A week later, I’d be reminded of a charity in town, Kate’s Kart, that gives books to hospitalized children.  My own daughter had received a book once and after a bit of research, I suggested it to Joel.  After some more conversation, we felt that something smaller and local, like Kate’s Kart was the ticket because while some of the big national charities are great, $500-$1000 would be a drop in the bucket to them but $1,000 to a great local group had the chance to be impactful.

So in January of 2015, Team Runnin’ Not Walken was born.  Three years later, we’re going strong, in fact, better than ever have raised nearly $17,000 for Kate’s Kart but how has that led us to Runners Doing Good?

The answer is pretty simple.  The team has been touched by a lot of events throughout the 4 years of our existence but no one other than family has probably been more influential than a man that I’ve never met, Tim Green.

When I see donations come in, I usually know who the donor is but that first year, I put a call out on twitter for a $10 donation to cross off your state on a donor scavenger hunt.  Tim donated $100.  I was really excited to find out who he knew and no one knew who he was so I reached out and found out that Tim just loved what we were doing and the charity that we were doing it for.  I’ve never had a “stranger” be more generous or more encouraging than Tim and we’ve been blessed, I’ve been blessed that he continues to support the team and in many ways, Tim’s assertion that if “Runners doing support each other, who will?” has become a bit of a mantra for the team and myself personally.

I started the Runners Doing Good twitter handle not long after and we’ve been able to support several different runners and groups that are doing good but participating in events int he name of charity.  It’s pretty remarkable and I owe a lot to a man who just feels blessed to be in a position to help others.

There’s a lot of negativity in this world but to have that level of positivity enter your life, it’s pretty remarkable and I feel beyond fortunate to have Tim in the team and I’s corner.

There’s more stories to tell about the team and I’m sure I’ll do that, but also know that hopefully I’ll be able to pay it forward a bit by highlighting others who are trying make the world a bit better and maybe we all can get behind them, like Tim did us, and make a difference for their run-gooder activities.  I think that’d be pretty amazing.  Have a great day everyone. 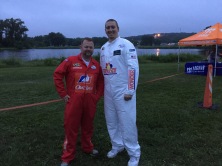